The most vocal supporters of President Obama’s push to reform our nation’s health care system will invariably say that health care is a “fundamental right.”

The so-called “right to affordable health care” has become the mantra and favorite talking point for those who say health care in the United States ought to look a lot more like it does in other countries, including Canada, Norway, Sweden or Denmark.

These folks generally support a single-payer system of health care, which resembles the current Medicaid program and effectively eliminates the need for private insurance.

In our first installment (Money for Nothing), we followed up on questions posed by Biddeford Mayor Alan Casavant on his Facebook page:

“So the moral question is: What should a society do in such situations? What should government do? Do we act, or do we allow the laws of Darwin to supersede our compassion, integrity and our humanity? The system is broken. . .”

Although we previously discussed the difference between health “insurance” and health “care,” Casavant’s questions also beg a discussion about where morality and government should — or should not — intersect.

The second paragraph of the Declaration of Independence is probably a good place to start when examining the concept, definition and limitations of “rights” held by the American people:

We hold these truths to be self-evident, that all men are created equal, that they are endowed by their Creator with certain unalienable Rights, that among these are Life, Liberty and the pursuit of Happiness.

Reading that sentence it becomes crystal clear our nation’s Founders understood basic rights come from a higher power than government. And this is a fundamental point.

Your rights are yours, with or without a government.

The government’s limited role, as defined by both the Declaration and the ensuing Constitution, is to secure and defend your individual rights as part of a much larger group.

But the Declaration of Independence also opens the door for a legitimate discussion and debate  about other “rights” beyond Life, Liberty and the Pursuit of Happiness, which are described as being “among” other, non-specified rights. 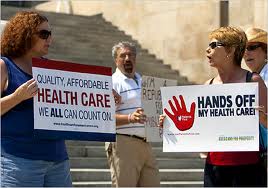 The argument for health care as a right gained further legitimacy when our Founders drafted the Constitution. It is within this document that our Founders more fully explored the concept of government’s appropriate role in promoting the “general welfare.”

Although the subject of health care is not discussed in either the Declaration or the Constitution, it could be reasonably construed as much of a “right” as public education — another topic not specifically discussed in those documents.

During our nation’s formative years, there was no such thing as public education. Education was reserved for the privileged few who could afford it.

Today, however, most people generally agree that our nation is better off when our citizens have — at minimum — a certain level of education.

Although our nation continues to grapple and debate public education funding, those costs and the ensuing delivery system is much easier to control than the cost and delivery of health care.

And here’s where it gets really tricky.

If we declare health care as a “right,” how does that impact your other rights as an individual?

If we allow government to take care of us, are we not abdicating our individual pursuit of happiness?

I moved out of my parents’ home because I was ready to enjoy my adult freedoms. I wanted to come and go as I pleased. I wanted to make my own choices about what I eat, when and where I sleep and all the other benefits of freedom.

If my pursuit of happiness includes a poor diet that includes a daily regimen of Big Macs and French Fries, are you responsible to help pay the cost of my inevitable need for a heart transplant?

We have established standards and limitations for public education.

We accept the fact that not every child will be able to attend Harvard or Yale. Of course, you have the “right” to apply, but those universities also have the right to reject your application.

If you want to make the moral case for public health care, what happens when your health care contradicts your neighbors rights to his/her religious beliefs?

During the Vietnam war, even our military made accommodations for drafted citizens to be conscientious objectors. If you are Catholic, should you be required to help pay for abortions and contraceptives?

Where do your rights as an individual end — or start — in a society that provides you with health care?

How much of your liberty are you willing to sacrifice for your safety?

One of the most ardent opponents of smoking was Adolph Hitler, a man who envisioned a nation of supreme and physically fit citizens. Mentioning Hitler in this debate is intended to be inflammatory, only if to give us pause.

If you have the right to health care, does that mean that other people should financially support that right? If so, are there any limitations to how much health care any one individual wants or needs?

These are legitimate questions and not very convenient for either side of the debate.

If we propose that health care is a right, then we will need to completely reconstruct our health care system. We would have public doctors and nurses, whose employment contracts and salaries are negotiated by the government — just like teachers.

We would also have public health care clinics that are less desirable than their private counterparts.

In the end, those with money would have better access to service than those without money.

The hypocrisy found in these arguments is overwhelming.

We want our choices. We want our freedom, but we would prefer that the consequences of our individual choices are funded — at least in part — by other people.

Maybe it’s just time to move back in with mom and dad.

If you would like to further explore the arguments for and against the concept of health care as a right, you may want to visit this website.

7 thoughts on “I don’t wanna be right”