I remember when we got our first color television. It was 1973.  My parents purchased the house two years prior, and that television was a refurbished Zenith console model.

I was the remote control.

From his favorite chair, my father would bark at me: “Turn to Channel 13! I want to see Walter Cronkite.”

Growing up in that house of Franklin Street in Saco with my sister and our dog, Kelly, I was positive we were a middle class family.

My father was a teacher. My mom worked part-time at Canal Bank. I was a Cub Scout and took clarinet lessons. My sister took ballet and tap lessons. We ate dinner at the table, and put on our good clothes for church on Sunday.

Shit, I was an altar boy. Life was good. Right?

Maybe, but it was certainly more a perception of reality than a hard fact.

What is the middle class? Who can define it? Is it disappearing or was it always a myth?

Defenders of the Myth 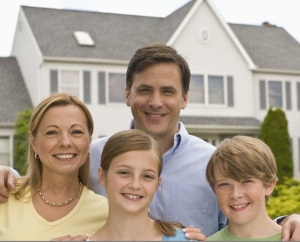 Politicians, pundits and just about everyone else loves to “stand up” for the middle class, but what are they defending?

Few politicians dare define the middle class because they fear what will happen if the economy tanks, and more people feel left out of the so-called American Dream.

According to an April 14 story in USA Today:  “President Obama mentioned the middle class a half-dozen times in his State of the Union address this year, and House Speaker John Boehner told Obama to “stand up for middle-class jobs.”

Google says [the middle class] has been called the “backbone of the country” at least 2.3 million times.

From gridlocked Washington to cities and town everywhere, the middle class is far and away America’s favorite socioeconomic group.

Yet no one can agree on what, exactly, the middle class is.

Economists and sociologists say that’s a big deal. Decisions are made, laws are written and elections are won or lost based on people’s beliefs about the middle class and what it means to the country. A nation that so values the middle class, they say, really should be better at defining it.”

According to numerous polls, most Americans define themselves as “middle-class,” despite ample statistical evidence to the contrary. It would appear that we prefer the middle. A short drive on the Maine Turnpike will back-up my anecdotal observation, watching drivers hug the center lane.

By definition, the “middle” is wedged halfway between lower and upper, between large and small, equidistant between left and right.

Go to the grocery store and try to buy “small” eggs. You can’t. The smallest eggs you can buy are “medium-sized” Try to buy a small soft drink at McDonald’s. You can’t. The cashier will offer you a medium. It’s ridiculous how we play these games of perception that have no basis in logic.

We don’t like to talk about the lower-class, the lower rungs of our socio-economic ladder. Nor are most people comfortable contemplating the rungs above.

Politically, we tend to generalize and demonize both the lower and upper class. Poor people have made bad choices and are inherently lazy. Rich people are greedy bastards who only care about themselves.

We puff ourselves full of self-righteous indignation, armed with little more than anecdotal evidence.

It appears that few things are more subjective than determining where you fit on America’s socio-economic scale. But let’s look at some data.

Now let’s look at the state of Maine, where the median household income is lower, estimated at $46,709 per year. Remember, this includes all income from everyone in your household, regardless of whether they are related to you.

So what should be the margin for determining middle income in Maine? For argument’s sake, let’s say +/- 10 points, so now we have determined the middle household income range based on data ($42,000 -$51,380).

Are you still in the middle class?

In fairness, middle class is more than just income. There are numerous other factors: home ownership, profession, level of education, marital status, etc.

But what about debt load? Even with a good income, those with high debt loads may be struggling and not feeling like the middle class.

Feelings are not facts

How we feel about our situation makes up a large part of our subjective analysis regarding whether we are middle class or not middle class.

A friend of mine recently stated that the middle class is evaporating. He bemoaned the good ol’ days of his youth and the opportunities his father had in the booming years following World War II.

Let’s think about that for a minute. In fact, I challenge you to get up from your computer and take a quick walk around your home. Is your standard of living higher now than when you grew up?

I started by stepping outside for a cigarette break. I have a snowblower. My parents had shovels. I have a boat, a camper. Not my parents. My truck was purchased brand-new; my wife’s car is fully loaded with tinted windows and a retractable moon-roof. My parents bought used cars.

Our houses are somewhat similar except my parents’ home had one bath. Mine? Two bathrooms and enough space for a home office. My parents didn’t have a cell-phone bill. They did not pay for internet. If you had blue-tooth, you needed to see the dentist. There were no home theater systems, no stainless-steel appliances and no one could imagine having a “personal” computer.

My father was able to finish college not thanks to a federal student loan but because my mother worked third-shift, painting little lines on resistors and capacitors at Components. We washed dishes by hand. We never needed a new printer. We had three television channels. No one in  my neighborhood had granite countertops. No one had a Jacuzzi in their bathroom. We didn’t have microwaves.

The more I think about it, the more it feels like I am George Jetson, son of Fred Flintstone.

We have moved the bar on “living comfortably.” We have raised the standard of living to keep up with the Joneses.