I am a racist.

Part of me is tempted to let that statement flutter alone in the social media stratosphere without context. I am curious about the the reaction, but I am not anxious to begin looking for a new job, new clients, new friends and a new wife.

Of course, I’m talking here about degrees of racism. But isn’t that the way it usually goes with us garden-variety racists?

Originally, I was going to write this post after speaking with an African-American “acquaintance” of mine, a woman I have long admired from a safe and comfortable distance. We have tentatively scheduled a cup of coffee — or maybe a pint of beer sometime in the next few days, when her schedule settles down.

I know of this woman only through third parties. Recently, we have become “connected” on a few social media platforms. I find her writing haunting and jarring.

So why did I deviate from my original plan?

1.) I am intimidated by this woman; and

2.) This week is so timely for this discussion, this musing of mine.  For one, this week we celebrated the 50th anniversary of the stirring and famous speech by the Rev. Dr. Martin Luther King, Jr.  We also have all the fallout from Gov. LePage’s latest verbal snafu; but more importantly . . .

3.) I am afraid that I would be less than honest if I met her before writing this. Meaning: I would try to be more careful, bend to my “white-man guilt” by being overly empathetic and trying desperately not to offend. In summary, I would probably open the flood gates of bullshit.

Some racists go all in with their prejudice. David Duke comes to mind, and so did the recent antics of a cranky and seriously disturbed retired cop in Sabattus, Maine.

Others take a shot at redemption in their later years. They either soften or gradually see the light; or — more appropriately  — begin smelling the rot of their own garbage. Strom Thurmond comes to mind, here.

I fall asleep at night comforted that I am not David Duke, David Marsters or even Strom Thurmond. I am more like Governor LePage, and more like most people I know.

I am a tiny bit racist. So I get to skate with the hip, the self-aware and the all-so-cool white folks who either ignore their racism or make excuses for it.

It is not excusable.

I had this race epiphany a few days ago while reading a media report about Governor LePage and his attempt to “clarify” and explain allegations made by anonymous members of his own party. Essentially, LePage denied ever saying that President Obama doesn’t like white people.

The governor’s defense centered upon his assertion that President Obama has repeatedly missed opportunities to heal our nation’s racial tensions, fumbling or ignoring golden opportunities to bring white and black people closer together.

For just one bat-shit crazy second, that explanation almost made sense to me. It was then that I could no longer deny that I was a racist.

Now, before I bring down the full weight and wrath of those ultimately loyal to LePage, allow me to back up. 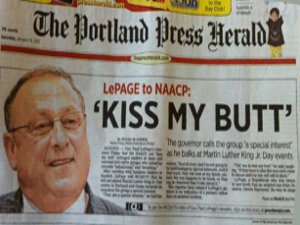 The governor was a little bit right in his criticism of President Obama on this front. But here’s the problem, LePage almost three years ago abdicated the moral high ground when it comes to easing racial tensions.

Most of us remember that cold day in January 2011 when local and national media went into overdrive regarding LePage’s alleged racism. He didn’t just decline an invitation to attend the annual Martin Luther King Day breakfast in Portland. Instead, he proudly (with what would become his trademark bluster) told reporters that “the NAACP can kiss my butt.”

If LePage is worried about missed opportunities to heal racial divides, he’s got a damn funny way of showing it.

Consider what he could have said. “I’m not sure why you folks in the media are making such a big deal about this. I simply declined an invitation because my schedule is full, but lets all remember that I consistently attended local MLK breakfast events in Waterville during my tenure as mayor. I also have taken a young African-American man into my home and helped raise him as a member of my own family. I strongly resent any implication that I am a racist. Let’s get busy talking about the important issues we are facing in Maine government.”

Nope, LePage could not resist coming on strong, full of sound, fury and arrogance. He began a path of allowing his pride to trump his greed.

How do we move forward?

I do not think our governor is a more successful version of David Duke, but I do think he has missed plenty of opportunities to talk in a meaningful way about an issue that is still very relevant in today’s world — even 50 years after the delivery of the I Have A Dream speech.

Unless I am willing to look at these things, to painstaking examine my own heart, I have no authority to opine on these issues. We must be willing to confront the things we don’t like . . . even those things that lurk in the darkness of our own souls. Otherwise, the garbage festers and it can grow and infect other parts of our being.

As I said before, these things are not excusable but there are reasons for their development in even the best of people. Part of it is our cultural and genetic pre-disposition to assimilate within the familiar.

In this way, I suspect strongly that I am not alone; that the majority of folks I know are just a tiny, tiny bit racist. We can work on it if we can be honest about it. If we start with the man in the mirror.

In the aftermath of the Civil War, the United States embarked upon a period of “Reconstruction.” Today, we would call in FEMA and lease some trailers.

The concept of giving former slaves 40 acres and a mule as reparation for their slavery was short-lived. Much of that land was eventually returned to its antebellum owners. From time-to-time, some guilt-ridden white folks and a lot of still angry black folks talk about the concept of ‘reparations” as the only way to heal the racial divide. Affirmative-Action programs were apparently a lot easier to digest.

Only weeks before being sworn-in, President Jimmy Carter granted an interview to Playboy magazine. It was the November 1976 issue. I know this because I was 12 years old and was an avid reader of my father’s hidden stacks of Playboy magazines.

Patty McGuire was that month’s centerfold. She was later named Playmate of the Year in 1977. She liked CB radios. I desperately wanted a CB radio back then. I saw Patti, and I knew it was a match made in heaven . . . but I digress.

Carter was trying to heal the cynicism of a post-Watergate nation by being painfully honest. In that issue of Playboy, he confessed to “having lust in my heart.”

Unfortunately, Carter had a lot of other tasks at his feet, many of which did not work out so well. But confessing lust in a Playboy interview is sort of like criticizing missed opportunities for racial healing after telling the Maine chapter of the NAACP to kiss your butt.

The message gets lost.

The letter I wrote to President Barack Obama on November 7, 2012:

First and foremost, please allow me to extend my most sincere congratulations on your hard-fought victory for a second term as our nation’s president.

Before I proceed further, I think it is appropriate that I disclose I did not vote for you, either in 2008 or yesterday. That said, I respect your office and believe you are a decent man who is committed to moving our nation forward to a better future.

I am writing you tonight to share a few thoughts and some unsolicited advice, knowing full well that it is highly unlikely you will read this note.

In essence, Mr. President, I believe you now have a rare opportunity with a second term. You have been unshackled from the constraints of re-election concerns, and I am hoping you will at least consider some of my points.

Although I applaud your efforts to tackle the complexities of our nation’s health care system, I have deep reservations about the individual mandate portion of the Patient Protection and Affordable Care Act.  I encourage you to consider pushing for the so-called “public option” as an enhancement to your signature piece of legislation.

Why would a Republican urge you to consider a public option? Because I believe that we must continue looking at innovative ways to contain skyrocketing costs and improve quality of care. As it stands, I see this legislation as a giant gift to the same industry that created the “health insurance” nightmare. A public option would, at least, provide us with the comfort that our government mandates health coverage but not payment to a myopic, for-profit industry.

Yes, I understand the limitations of public policy development, and I can appreciate the value of sincere compromise. But I believe a public option would require private insurance companies to remain competitive instead of giving them a giant gift of additional revenue sources.

Secondly, I would like to see you tackle the immigration issue with the same clarity and conviction you displayed two years ago in your fight to repair our nation’s health care system. I would favor a system that rewards hard-working people who wish to become citizens of our great nation without tolerating those who intentionally attempt to elude the system.

Certainly, we have the technology and means to streamline the naturalization process, and we should be encouraging and welcoming more people to participate in our system of government rather than focusing so much of our time and financial resources in pursuit of a punitive process that yields so few benefits.

Finally, I hope that you and your administration will focus more of your efforts on our sluggish economy and our crushing national debt. We all know that too many Americans are in deep despair and facing serious and significant financial hardships. I urge you to be mindful of these implications as you consider each and every policy initiative that comes across
your desk.

I want you to know, Mr. President, that I stand ready to accept that challenge; to further commit myself to working with my neighbors and all fellow citizens for the betterment of our nation.  I reject the idea of living in fear and constant anxiety about an uncertain future. I stand ready and able to help you and every other American who is willing to work on behalf of our country.

Although I will continue to criticize some of your ideas and policies, please rest assured that I will also stand shoulder-to-shoulder with you at all other times.

I sincerely hope that you are able to receive my words as they are intended, and I hope that this correspondence finds you, the First Lady and your two beautiful daughters safe and content.